This summer semester 2022 the lecture series will be hosted in a mixed format.

Please sign up for our newsletter to receive reminders and further information.

Our next guest and upcoming lecture will be #247 of the UdK Tuesday series with Dries Rodet on behalf of Truwant + Rodet + upon invitation by Professor Bru.

Given the current circumstances, we value the digital content we have collected over the past years more than ever. The UdK Tuesday, formerly know as Udk Monday series, is a collection of lectures and interviews from national and international architects.

The collection is so extensive that we will use this semester to send a weekly recommendation, including a lecture and and two interviews, based on a certain theme or interest.

Please note that this is a temporary situation – of course there will be new lectures and interviews conducted in the realm of this lecture series, as soon as the circumstances allow.

This week's recommendation is talk and lecture with Bob Sheil, recorded at UdK on April 28, 2015.

Watch this talk to get a deep insight into the mind of one of the great architecture educators at work right now. Bob has risen through the ranks of London's Bartlett school, taking his intuitive workshop based approach to the very top.

What you can learn from this talk is:
1) how, why and when to trust your intuitions
2) how to listen when the material you are working with is trying to tell you something
3) what you can expect to get out of a good architectural education
4) what you have to bring to it yourself.

Bob Sheil is the director of one of the finest schools of architecture in the world, a public university that emerged from a hundred year sleep of genteel irrelevance about 30 years ago to offer the expensive, private AA school a run for its money. I studied at the Bartlett in the late 90s, Bob was just a lowly unit tutor back then, but it was clear to me that his visceral, intuitive, intellectually rigorous approach was going places. I am grateful that I got as much exposure to him as I did. This talk boils down the essence of his approach. It will be of great use to anyone who is learning our craft. There is no better time than now to pause and think about what you are getting from your education and how you can push it further, this talk will give you food for thought, as well as showing some beautiful and thoughtful eye candy into the bargain.

Our recommendation is accompanied by an introductory text from Stephen Malloy, who studied architecture at UdK, graduating in 2006. He worked internationally before coming back to teach at UdK. From 2009 to 2014 he was an assistant and then a guest Professor in 2015 for Studio Sauerbruch, before founding Fundamental together with his former peer, Gunnar Rönsch, in Berlin. Next to their architecture practice, the two started producing furniture and frequently experiment with new ways to use favourite old materials, playing with patterns and colours.

This week's recommendation is talk and lecture #100 with Gabrielle Hächler, recorded at UdK on November 7, 2011.

Gabrielle Hächler was born 1958 in Lenzburg, Switzerland. She studied Art history at Zurich University and architectural studies at the Federal Technical Polytechnic (ETH) Zurich. 1988 she received her degree at the ETH Zurich under Prof. Mario Campi. After working as an assistant Professor for 4 years in the Department of Construction at the ETH Zurich, she opened her own architectural office in 1988. Temporary cooperation with other architects and artists. Since 1995 co-operation with Andreas Fuhrimann. Hächler held a Guest Professorhsip at ETH Zurich from 2009 to 2011. From 2011 to 2014 she taught as a Professor at UdK.

This week's recommendation is a talk and lecture with Tassos Biris and Sofia Tsiraki. Recorded at UdK on January 19, 2016.

Today Tassos Biris runs an office together with Sofia Tsiraki in Athens.
Find out more about their work and see their extensive sketches here.

Our recommendation is accompanied by an introductory text from Professor Bettina Goetz, who invited Tassos Biris in January 2016, following their chair's excursion to Athens, Greece.

This week's recommendation is a talk and lecture with Hans Walter Müller.  Recorded at UdK on June 21, 2016.

Hans Walter Müller was born in 1935 in Worms, Germany. From an early age on, he became and remained interested in magic tricks and arts. After receiving his diploma in Darmstadt in 1961, he continually pursued specific studies in Paris, focussing on materials of his time: artificial light, the projection of images, the plasticity of material and electrical motors. As part of the "Art Cinétique" movement, he is known to be the creator of inflatable structures, allowing these to become inhabitable structures through inflation. Since 1971 he resides in an inflatable house close to Paris. He was rewarded multiple prizes and worked together with artists such as Jean Dubuffet or Salvador Dalí.

Our recommendation is accompanied by an introductory text from Ludwig Engel, a futurologist and urbanist, living and working in Berlin. He teaches, curates exhibitions, publishes books and advises companies and public institutions.

I think Hans Walter Müller is a really interesting figure that started out in the late 60s when inflatables where becoming quite a thing in artistic-architectural circles all over Europe, pushing the idea of architecture towards temporality, mobility and flexibility. Despite (or because?) of his very German name until today he remains quite unknown in Germany but is considered an icon in cinetic, parasitic and inflatable installations in France that inspired generations of architects and artists. And I can think of noone continuously pushing the limits of how to live with and in inflatables until today, as Müller, who‘s inflatable home resonates with me quite strongly as a „utopian ghost“ - a future that we could have had and maybe still wait for, especially these days where we are locked away in our boring standardized apartments.
Maybe I would like to give a quick nod here to Haus-Rucker-Co, whose founding member, Zamp Kelp, was a professor at UdK for a long time. Their inflatable works from „Ballon for 2“ and „Oasis No.7“ to „COVER“ are probably the most seminal works of inflatable architecture and you should check them out if you haven't come across them already. 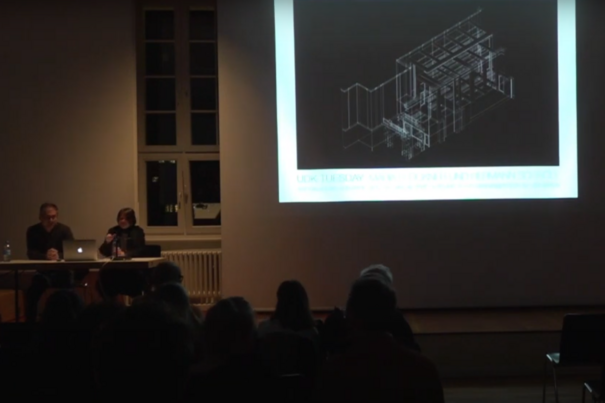