From 15th May to 26th June 2020, UdK Berlin hosted a Digital Meeting on its newly developed medienhaus/ platform, an open source digital education research project, which offered both a plenary session and separate rooms for a variety of digital sandpits, where participants were invited to explore existing and potential research collaborations in an informal environment. Starting with a collective kick-off event, researchers and artists from both institutions were able to successively supply their individual contents. The distinct spatial architecture of the communication platform allowed establishing passages from one room to another, providing deliberate connections between inidivdal projects. On 5th June, a Bergfest was held to discuss progress and preliminary outcomes, as well as stirring further interactions.

The series culminated in a two-hour digital workshop on 26th June, featuring a panel discussion on Walther Benjamin's stance on arts and politics, and presentations on individual sandpit projects.

On this page, we showcase a selection of sandpit projects that were presented and discussed during the digital meeting:

Climate Crisis Thinking in the Humanities and Social Sciences

A shared agenda emerged, of resisting the tendency to treat arts, humanities and social sciences as valuable only as communicators of ‘the science’ in climate change research. To some extent, our disciplines have been complicit with these expectations. They have not been proactive in bringing their expertise into public or policy conversations, or in reframing their own disciplinary methodologies and research questions to meet the rapidly changing conditions of life. We would like our project to bring attention to this situation and to highlight the value of new approaches. We want to put forward a compelling argument for the urgency of bringing perspectives of disciplines that concern themselves with humans to the complex crises that have been caused by human activities, ideas, practices, values, and deep-rooted configurations of power, injustice and exploitation in our societies. It is starkly clear that science-led approaches to the entangled issues of our times have largely failed and that we are now living in a time marked by deteriorating conditions for planetary life.

Our project, acknowledging this context, would aim both to illustrate, and to create discussions around how to change knowledge-making practices.

Our hope is to use ‘animal eyes’ to shift our perspectives. This is especially pertinent because portraying (charismatic) animals as victims of human activity has been fundamental in very long-standing narratives around conservation (as well as colonial achievements and trophies, exotic ‘othering’, etc) and have been used from the beginning to underline climate impacts. These approaches tended to rely on familiar imagery to communicate findings of scientists about impacts on ‘remote’ regions (regions that were remote to the intended consumers of the imagery). The animals possessed little agency or observational power, and their responses to climate change were – if ever depicted – anthropomorphised, within wider Anthropocene tendencies. They were depicted as isolated, and their relations with encroaching human societies were, if mentioned, presented in stereotyped ways that rendered the human societies also exotic, other, and predatory in a way that ‘we’ (in the west) could deplore without needing to act.

Will Play - Where AI meets Shakespeare

Oxford Faculty of English is at the early stages of a collaboration with a local games company, To Play For, who have developed a machine-learning storytelling platform called Charisma.ai. Together we have created Willplay, an interactive, AI-powered reimagining of scenes from Shakespeare’s Romeo and Juliet, and Macbeth. In the game, the reader becomes an active participant in the story, able to influence the actions and decisions that determine the direction of the narrative. The scenes take the form of a WhatsApp-style group chat, enabling young people to engage with Shakespeare’s story and interact with his characters via a familiar, accessible medium. In creating newly interactive forms of engagement with these plays, we both mimic contemporary social media and digital platforms, and also reflect the longer history of early modern drama which was shaped by audience participation in startling ways. We have integrated some aspects of Shakespeare’s original script, but we have also modernised the language, both to suit the form and to keep the story accessible for an audience of 11-16 year olds. The game enables players to explore themes and issues nascent in the original play which take on new significance in a 21st century context: to what extent is the Montague/Capulet feud spurred on by toxic masculinity? And how might we think differently about Romeo’s propositioning of Juliet in a post #MeToo era?

Our work - be it art, science, technology - is to re-construct frameworks of situations enabled by listening in: - sound art, especially in the possibility spaces within and between digital and analog worlds - composing with machines - past and present, living and machinic auditory/listening systems and their agencies - improvising with and without life electronics, algorithms, and chance - sharing playing and listening agencies between humans and machines - ambience, noise, and silence While machines for recording and playing sounds seem to be a natural part of everyday life, the opposite is less self-evident: that it is art which frames the machines, their uses, the sounds recorded, their reception and documentation. Relinquishing the construction of machines for exploring sounds and sound systems to science, technology, and theory would be a one-way street - this needs counterbalancing in second-order feedback loops with art and its framings. 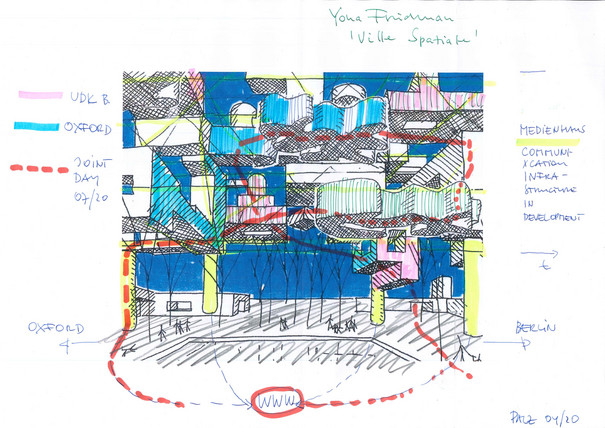 We invite you to a joint visit of the Mediahouse platform. Limited participation by guests is possible. Registration is open until June 24th.